I don’t like pork. I say pork…… what I mean is roast pork or pork chops, that sort of pork. I love bacon. And ham. And sausages, particularly cold sausages which are quite a different beast to the hot sausage and best eaten from the fridge, while wondering what to eat…..

I don’t like BBQs either. I hate BBQ sauce. Even though I lived for a time in Los Angeles where everything is cooked, al fresco, on the BBQ, surrounded by blokes with long folks poking it and drinking beers, I still tend to remember the dodgy outdoor dining of my childhood: chicken legs systematically burnt and blistered on the outside, appetisingly raw on the inside. It's a wonder any of us have made it to middle age.

So, you might wonder why it was I could be found queuing…… yes me queuing ……… outside, on a chilly evening, to get into a BBQ joint specialising in pork. Quite simply I was so seduced by the pictures of pork being served up at Pitt Cue Co. I could think of little else for a week. This Southern-style American BBQ project started life, I believe, in a mobile catering truck under the Hungerford Bridge, where the queuing began, and is now London’s brand new, must-go-to, Soho eatery, situated on a corner near Carnaby Street.

Once inside we then had to wait some more, but we were in and we now had a pair of Whiskey Sours to warm us up. The bar is teeny-tiny, and serves a whole lot of different bourbons, amongst other things. We were seated eventually at the bar by the window: half curtained, looking out onto the street. I felt like I was back in

New York's west village. The high ceiling is strewn with low hanging, low light, clear light-bulbs; the only way to light a restaurant in London at the moment. Downstairs there is more seating for about 20 or so but it's a tad tight.

The menu is small, beautifully formed and vegetarians are welcome but not catered for. They do pork and beef a couple of different ways and a choice of sides, but here I feel it's all about the pig. And they do take away.

My mate Dave knows all about pork, and BBQ, and expertly ordered us ribs and slow-cooked, pulled-pork with sides of slaw, mash & burnt bits, and a jar of pickled stuff. The food comes lip-sticky and unctuous and smokey, the pickles and slaw crunchy and sharp, a perfect accompaniment to the sweet BBQ sauce we sucked from our fingers. Dave pronounced it all excellent. For me the pulled pork was the winner. I appreciated the smokey ribs and sticky-sauce but it’s never going to be my first choice. But I could happily have eaten the whole jar of ceamy mash topped off with the ‘burnt’ bits of chewy pork from the pan, again and again. 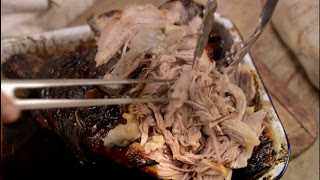 The buzz is big about this place. It seats only 30 so they don’t take bookings, to make it fair they say. It also makes queues down the street which is never a bad look. Whoever’s doing the PA is definitely doing their job, a clutch of Canadians desperate to order and newly arrived in town had it on their itinerary .……. the place only opened last week. The guy on the door sounds like a Rupert or a Charlie and much of the clientele seamed to be on first name terms with the staff who probably all went to school with each other, no doubt helping to keep the place hot and heaving during it’s opening weeks. I'd happily go back..... when the queues go down......

I read with interest that Bryan Ferry, 66, the rock god with the matinee idol good looks and Roxy Music’s frontman, has married for the second time. Shame, I'd pencilled him in as a possible. Anyway, it turns out that this time around Bryan has married a woman he was apparently introduced to by one of his sons, Amanda Sheppard, 29. About the age gap he has said:
“You never meet people your own age who aren’t married. Unless they are divorcees knocking about, that sort of thing.”
What does that mean? Is he himself not a divorcee?

I went out with a divorcee the other day, H, 56, he was knocking about on the internet. Like most things from the virtual world of the webb, the picture of H hid more than it revealed. About 10lbs more. The evening we met was particularly cold and he wore a large puffy jacket. H is a director and I recognized the coat as the sort of thing one wears on location, or up the Eiger. Usually these warm but heinous garments are black. This one was cream so H resembled a sort of grubby Michelin Man.

“Any good with zips?” he asked.

He had got himself trapped in his anorak.

“Oh good he said,” when he was finally released, “we’ve got 15 minutes, can I get a chocolate malt?”

I was so completely taken aback by this request I just nodded.

I didn’t. We walked around the corner to Ed’s Diner to get one for him. He chatted 19 to the dozen, that's OK I thought, nerves?
"Are you sure you don't want one?" he asked.
I still didn't. I wanted a vodka and tonic. Then he ordered two chocolate malts. Oh, I thought he has bought me one, that is kind of sweet. But no. They were actually both for him. He then asked me if I’d liked the movie, 'Sideways'.

“I loved it." I replied, "It’s one of my favourite.”
H hated it. How can you hate ‘Sideways’? I kind of knew he would hate the movie I’d chosen for us to see, ‘The Artist’. He did.

I wonder how long my date would last if I rock up, over weight, clutching two milkshakes? Age seems to bring with it a gross imbalance of effort between the sexes. Maybe I should try Bryan Ferry’s approach…... 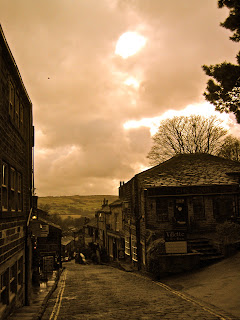 And here is a picture of Howath in West Yorkshire, the closest place I could find amongst my snaps to Hockney country.
Top tip: do what ever it takes to get yourself down to the Royal Academy of Art to see David Hockney: A Bigger Picture.......... there are no words, un-missable........ if it doesn't raise your spirits you have no spirits. It's because of him I went to art college and set my life on it's course.....
Posted by Young at Heart at 12:50 19 comments:

Just before Christmas I had a haircut: a cute bob, very French, very Louise Brooks. It was well received by family and friends. It worked with both a smokey eye/nude lip look and a flash of liner and a full-red-call-me-Marilyn pout. I was tres pleased. I was also pretty happy at the thought of a date with a prospective beau, v tall, v handsome, I'd met after, and I'm sure because of, the haircut. So happy, in fact, that I was still smiling after reading a text he’d sent while walking to the art shop to buy supplies to make Christmas cards with (4 years at art college not wasted……). I was doing the flash of liner and full-red-call-me-Marilyn pout look that day, the bob gleaming in the winter sun, and as I passed a man walking towards me……50-something, tall, slim, full-head of greying hair…….he smiled at me smiling. I went into the shop. I stood before a vast array of art materials making my choices when I realised the man from the street was now in the shop. I made my purchases. He bought a pen. We left together.

“Are you an architect?” he asked.

That was then, this is a new year. The date that gave me a smile ended with a frown and so when I saw the architect’s card on my desk I thought, why not? Now, I did think it through, I did Google the practice, I did establish it was in fact his and I decided it was unlikely he was an axe murderer. I also wondered why he’d assumed I was single. And whether he was.

I called him. He did remember me. He was delighted. Happy new year....... We met that evening. In the pub on the corner. 6.30pm. He bought me a vodka & tonic. He was married. But his wife didn’t understand him. I did though. I finished my drink, suggested he explain the problems he had with his wife to his wife and got the bus home. 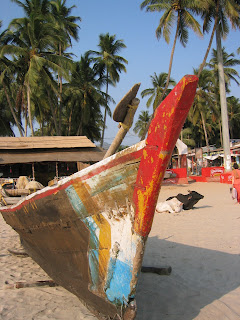 And this is a picture I once took of a boat on a beach in Goa.......just to remind us that somewhere else the sun is shining, the weather is hot, the sea sparkles silver in the morning and ripples gold in the evening........ and because now I can upload pictures I shall.......

As I have reported previously on these pages, I am not a natural gardener. But having had a modicum of success with tomatoes and rocket and basil and coriander last year, I thought, hoped, that fruit and veg maybe where my green fingered talents lay. So, my gardening friend gave some plants to plant. The ruby chard started well and then sort of died. The brussel sprout has done anything but, the kale started well but has stopped and the cauliflower is all cauli and no flower. But the rhubarb has thrived. I was told the two types, the names of which I now forget, needed to winter before they could be picked and crumbled, roasted, fooled, whatever..... and low, through the dank soil they continue to poke and bloom..... 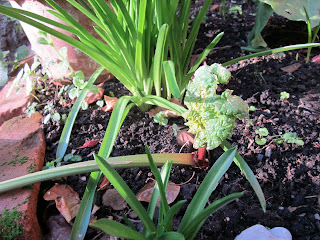 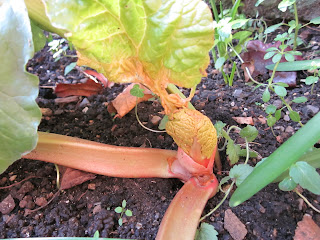 Doctor, doctor I I've got rhubarb
Don't' worry you can get cream for that.....
Rain lashed London shone in the bright morning sunlight. Stick trees poked the high blue sky through thin chilled air. On the bus I saw a baby cocooned in his buggy, nothing but his round, hairless head poking out. He had the look of a man of 80 rather than his 18 months, I domed forehead, knowing blue-grey eyes, a down-turned mouth slow to smile a toothless grin. He peered about him with a world weary gaze. The bus stopped to let a funeral procession pass: 4 large long black cars following a hearse containing a giant, wicker eco-coffin, a coffin-shaped, man-sized, moses basket with a lid with toggles to keep it fastened....from the cradle to the grave......
Top tip: Go see The Artist........I'm not sure it's quite 'the greatest movie ever' but it's delightfully charming and very beautiful.....
Posted by Young at Heart at 03:54 19 comments: