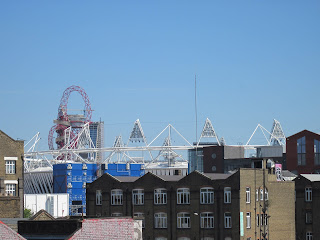 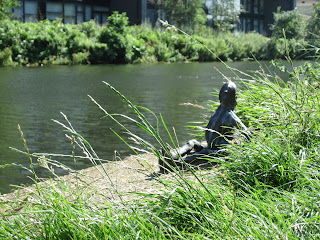 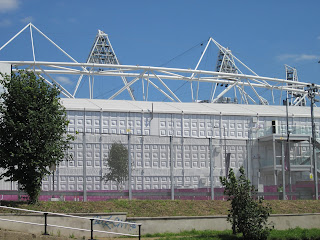 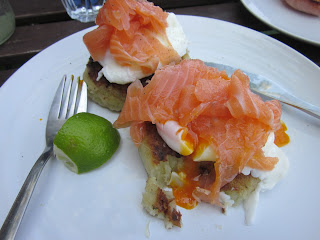 Top tip: sit at the front of the DLR train for a great view and pretend to be the driver…….
Posted by Young at Heart at 11:11 17 comments:

A Jew, a Muslim and a Christian were standing outside the Tube …….. no it’s not a joke, it’s Brixton. Feeling ravenous and looking for redemption? Then try Brixton Village Market and feast on both. My mate Dave and I took a leaflet from each, and headed into the heart of this vibrant, iconic market, a warren of world cafes, to Senzala Brixton Creperie Bar & Café, housed in The Brick Box, deep amongst the African prints, vintage boutiques and pig’s heads. Mercifully the market is covered so we sat outside amongst the hip and the hungry. Spoilt for choice we chose to share, first a crispy galette stuffed with a classic combo of creamy goats cheese, caramelised red onion and rocket, then one brimming with crispy bacon, sticky with maple syrup. 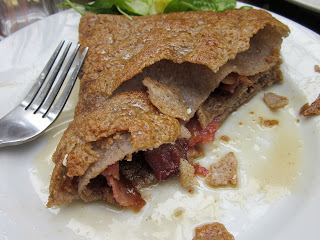 Both were good but best was The Godfather: bursting with jalapenos and melted cheese, spiked with lip-tingly pepperoni. Service was the slow side of relaxed but so were we after a pint of Normandy cider. Still desperate for a taste of summer, we couldn’t resist one plump with strawberries and melted dark and white Belgium chocolate, topped with vanilla ice-cream. Food of all the Gods, surely? 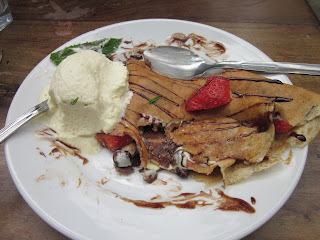 Top tip: The Hollow Crown, BBC2 Saturday night or iPlayer any night, Shakespeare in all it's historical bloody glory..... just bathe in the language and tip top acting.
Posted by Young at Heart at 01:43 16 comments:

I think I've gone straight into winter mode so this week......
I watched TV:
The lovely June Brown, octogenarian thespian Dot Cotton of Eastenders fame and budding national treasure, explored the prospects open to her when she gets old, in 'Respect Your Elders', on BBC1. She is 85. What she reckoned was, young kids should hang out with old people because they like each other quite a lot; if you get them early enough the kids grow up valuing their knowledge, humour, patience and the old folk get to have some fun. Her theory is the children would then learn respect for their elders. All elders. Not a bad idea. She thought a rent-a-grandparent scheme might be good. She also came to the conclusion that she wanted to die in her own bed in her own home. And to that end she had a dog-tag engraved with 'Do Not Resuscitate' in case she collapsed elsewhere. Except the engraver spelt it wrong, allowing the show to end on a humorous note. I like June a lot. She is much older than she appears. Her still slender frame hangs from her sharp cheek bones, her hair is cut into a chic bob she can artfully disguise for any roll. She dresses with flair, is lipsticked and nail-polished, lives in her own home and works. Is lucid and active. And still smokes. Is it the portion control she clearly adheres too that keeps her fit and alert? Or the fact that she has a large family of children and grandchildren with whom she regularly interacts, she is obviously a huge part of their lives? Or is it because she still works, goes out into the world, brings home the bacon, has a job to do?


I went to Margate:
I saw the Tracey Emin show: She Lay Down Beneath The Sea, at the Turner Contemporary. Her work juxtaposed with Turner’s and Rodin’s drawings of nudes is alarmingly effective. I felt transported from the grey world outside as I walked through the high ceilinged rooms, letting the sun into my soul. We had lunch in the gallery’s restaurant. I had a delicious seafood chowder and through the huge picture window, the clouds scudded the sea making Turner’s view our view. It was quite electrifying. 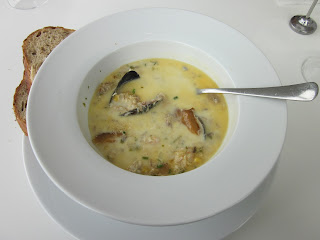 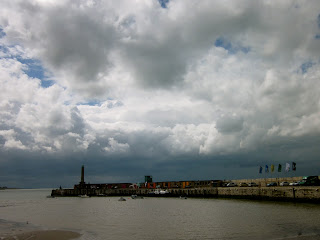 Top tip: what to do if it rains..... go to Margate to see the Tracey Emin show: She Lay Down Beneath The Sea, or any gallery near you and make your own sunny day.
Posted by Young at Heart at 01:12 16 comments:

I’ve been away. On a road trip. I went to Wales. And then I went to Bath. To see Patti Smith. As a fan of the godmother of punk we devotees have to be beady-eyed and quick off the mark should she announce a tour. Bath was duly booked as there were no dates for London (there are now and we have more tickets.....). And then we discovered she was playing the Congregational Church in Laugharne. Well who could resist? Patti? In a church? In Wales? So, channelling my inner Dylan Thomas, I packed a selection of fetching all-weather-but-mainly-wet gig-garments and off we set. I love a road trip…. any road…. and we took it in turns to drive my mate Mick’s big, comfy, speedy motor. I took the Severn Bridge as the sun came out ….. and soon we were spinning gravel in the car park of our B&B, Keepers Cottage, run by Rose and Marge …. don’t ask just go, they are brilliant: big breakfasts, a big view and even bigger hearts. A swift pre-gig pint of Guinness with other Patti revellers soon alerted us to the fact that the Queen of Punk, a keen participant of the Laugharne Festival in prior years, had that afternoon actually sat amongst 20 of her followers, the chosen few, in the shrine to Dylan Thomas that is The Boathouse, chatted, read and led a Because-The-Night-sing-along…… I was a bit gutted, how long before I let it go? Yeah ….. any day now. Still, she and Tony Shanahan performed a perfectly formed, intimate acoustic gig, that was nothing short of biblical, and we danced home bare-foot and happy. Before leaving Laugharne we explored through the murky mist and rain, the place that was part of the inspiration for Under Milk Wood and I was inspired to write a poem. 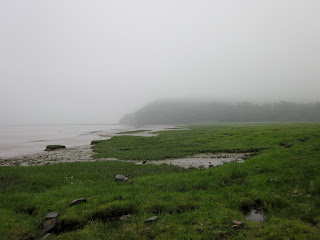 The next night in Bath, Patti with the full band was …..well to use common gig parlance … blinding. The woman must be injecting monkey glands, cavorting about the stage, belting out Gloria and Pissing In  A River with the vim and vigour of a 20 year old, she’s 65 for godssake. And the audience, mainly old it has to be said, took to their feet and rocked through their ages. 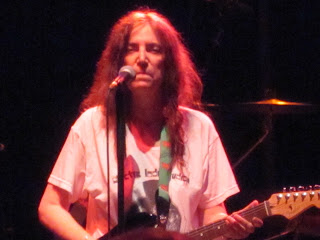 When Patti Came To Laugharne…..
Wake walk the winding street
Past high church high
On the hill
Filled before with Patti the song.
Sea below where coracle
Hammered hard in mud rushes
Under gull dived walls of castle ramparts
Flowering overhead.
Men and women work-weave their
New boats
Made ready to dip-bob the running stream.
Pissing in a river we hum to ourselves
And sing think the songs
Patti sang to us
The congregation.
We dance barefoot to the boathouse
Press-nosed glass
To view the view Dylan Thomas viewed
As he wrote
Where he wrote
When he wrote
And we sing the words Patti sang
Under the southern cross.
Then turn grave thoughts to the graveyard
And let the last trumpet sound
It’s call
To see where he
Lay down his head
On mossy bed
‘neath bleach boned white sky
Under milky wood. 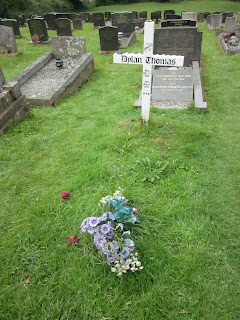