My dinner with Adrian…….

Ever wondered what it’s like to dine out with AA Gill, food and TV critic at The Sunday Times, boyfriend of The Blonde, hobbnobber with the stars and Jeremy Clarkson? Well now I can tell you because I did. I say with but what I actually mean is at the table cosily next door to: AA Gill, The Blonde, Sir Michael Gambon and Philippa Hart, in an uber-ultra-uber-trendy restaurant especially created for the uber-ultra-uber-trendy. I was beside myself with joy, well actually I was beside Dumbledore, because I absolutely love AA Gill’s writing. I’m not that bothered by what he thinks but the way he thinks it makes me moan and gasp in hysterics most Sunday mornings, choking on my wholemeal sour dough toast and snorting latte from my nose. And I think Sir Michael is damn fine too, I’ve seen his Pinter. 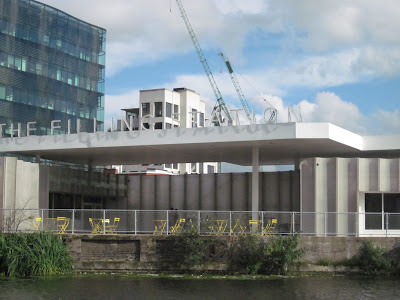 Shrimpy’s is the latest love child from David Waddington and Pablo Flack, of Bistrotheque, and is housed in The Filling Station, quite literally an ex-petrol station, back of King’s Cross, over-looking the canal: a clutch of tables, bar stools at the bar, big windows, small menu, linen, silverware and glass; think Edward Hopper does The Stork Club. The food is sort-of-south-American and their signature dish is a Soft-Shell Crab Burger. And so my mate Nige and I filled up on salt cod croquettes, calamari, a mass of crunchy soft-shell crab and avocado in a bun, octopus and shoestring fries, where I once filled up with petrol. The thing is, so did AA Gill, The Blonde, Sir Michael Gambon and Philippa Hart, and let me tell you Adrian’s bun was bigger than mine.

“I can see where the other 7 legs went now.” remarked my mate Nige, as their order of octopus and potato arrived.

Because I was snuggled up next to Dumbledore on the banquet, and opposite Adrian, I could see straight through the rectangular window and into the kitchen where, behind AA's head, Tom Collins, the head chef and nowhere to be seen when we’d first arrived on this Monday night but now very much present and possibly air-lifted in when one of the soft-shell-shocked crew recognised who was in (I’m sure Gill's face along with every other critic’s is plastered in most restaurant kitchens) were amassing their food with due diligence in a flurry of fevered activity. Then me and my mate Nige sort of slipped off the radar and might well still be sat there now waiting for dessert menus if we hadn’t pleaded with a waitperson. We shared a chocolate brownie sundae and so did Adrian …… but not with us. It was delicious despite my mate Nige getting both bits of brownie. The service, when we got it, was charming and the bill is big even if the portions are not. Roll on Sunday, I can’t wait to see if we enjoyed our dinner…………

Quite frankly I've had enough. Prince Philip is not the only one to get taken down during the Jubilee celebrations by the howling gales. I went to Dorset for the long weekend, to take the sea air, celebrate my Goddaughter's 7th birthday and eat red, white and blue cake. Having enjoyed rude health for the whole winter, before, after and during Christmas..... for which I am traditionally cold-stuffed-and-coughing........ I now have a monumental cold that has resulted in bed rest.....in June. And so I am going to get away from it all for a short foreign break....... where at least the rain has an accent. 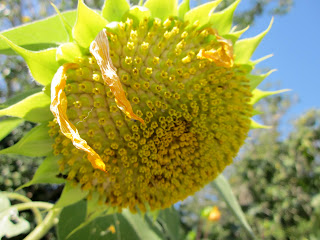 Top tip: Ginger Beer is much better than Barley Water or Lucozade as a sick-bed tipple.
Posted by Young at Heart at 09:26 22 comments:

Gentlemen, you might want to look away now, I’m going to talk about the menopause....…..

The first rule of being menopausal: you don’t talk about the menopause

Weird isn’t it ….I know it's getting a bit more fashionable….but the bottom line is no one wants to be menopausal. And no one wants to discuss it. It’s not sexy, it’s not glamorous, you don’t look good, you don’t feel good….by varying degrees. I had never even heard of perimenopausal until I was. These are just some ….. yes some …… of the symptoms: hot flushes, night sweats, anxiety, depression, mood swings, sleep problems, weight gain, wrinkles, thinning and greying hair, headaches, diminished sex drive, allergies, vaginal dryness, feelings of isolation, bloating, tiredness, and spots. And you lose your mind. Suddenly and without warning. It happened to me. I had it when I came in the house and by the time I’d walked into the kitchen I had no idea where I'd left it, why I was in there, where my keys were or what my name was. Or anyone else’s.

If you’re in a relationship then just at the point when your kids are flapping their wings, you are morphing into a grizzled-greying-exhausted-fat-sweating-husk of your former self, and your man will probably be eyeing up a Moto Guzzi and or a Ferrari, the twenty-something office temp called Carly, gym membership, chunky-silver-skull-themed jewellery and a piercing....or two. And if you’re single….. well good luck with that. Perhaps it should better be called: men-on-pause.......

Tracey Emin recently said the menopause is the beginning of dying and I have to agree with her, it can feel like that, it is the death of your reproductive years. According to Jill Shaw Ruddock, in her book: The Second Half of Your Life, we are all going to live a whole lot longer so we need to get through it and embrace the new found vim and vigour that could be waiting on the other side. Technically, the menopause is declared ‘official’ exactly 12 months to the day after your last menstrual cycle. The day after that…..you’re post-menopausal. However, the stop/start nature if this imprecise period, usually somewhere between 43-59, means you don’t know which period is your last period until you never have another one. And the symptoms may continue. The typical length of the whole transition is 5 years.

I hadn’t had a period for almost 2 years. Till Sunday. Just when I thought I was post-menopausal……..back to square one. But, oddly, I felt younger.
For those of you who have followed my recent theatrical adventures, thank you for your kind words ....good news, I have tickets for Love, Love, Love next week. Being old and irritable I rang the Royal Court again, to weep and gnash my teeth and the lovely girl said: oh yes we do have some tickets available for people who were cancelled. Really, I said, no one mentioned it before. Oh yes, she said, we didn’t then but we do now…..better seats but you can have them at the same price you originally paid…… result. Sometimes being old and irritable has it's moments.......

Top tip: Tracey Emin: She Lay Down Deep Beneath The Sea at Turner Contemporary, Margate.......go see her work the menopause.
Posted by Young at Heart at 11:44 33 comments: