"The Roman's used to eat this pickled," said my friend, reaching out of the car window to pick something green from the curb, "it's Alexanders."
She handed me something that looked like a tiny green cauliflower."It tastes like celery." she said.
It tasted green.

We were spending the weekend at Wowo Campsite in deepest East Sussex, first prize in some eco-related competition which my friend had won for making her street turn their lights off...... or something......we were, apparently Glamping......Now I don't do well in the countryside and I'm not a natural camper. But, determined to embrace all that it had to offer, I had nominated a stop off at Charlston House on our way to the wood because I've never been and always wanted to go. Passing through several climate changes en route down the motorway, I was ecstatic with joy when the sun came out and the clouds turned fluffy, just as we turned into the field-for-parking. First we went for lunch in the hand-reared-locally-sourced-grow-your-own cafe and then took a turn around the garden. 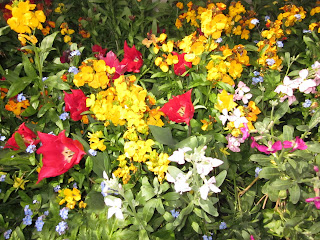 The borders were spackled with vibrant colour and the vegetable garden was only missing Mr. McGregor. Everywhere lurked sculptures looming large and small through the undergrowth. By the pond, ducks swam beneath the gaze of a floating woman, glimpsed through the trees, apparently supported by only her flowing hair. It is quite brilliant. 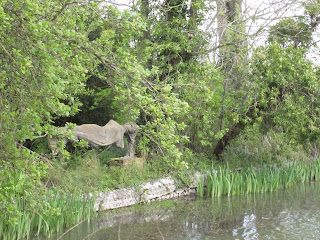 "We're starting in the kitchen because it's Friday," said Terry, our guide, swathed in fabrics various held in place with a wide leather belt, she was the only person you would want to show you around the Bloomsbury Group's bolt-hole. Apparently, Friday is a bit of a special day at Charlston, not only do you get to go in the kitchen but you also get to look at books they defaced with their shopping lists and doodles and you get told about different stuff..... but more of that later, as Terry would say, frequently. Later never really came.

To stand in those wildly painted rooms I found really thrilling. I kept touching the hand-daubed walls although I'm sure you're not supposed to, imagining the hand of Vanessa Bell steadying herself at the sight of Duncan Grant painting away in his studio or Virginia Woolf having a bit of a turn after penning a particularly exhaustive sentence. They really were the most brilliantly functioning dysfunctional family.

"And that is a painting of Vanessa's daughter Angelica," said Terry, gesturing to another portrait hung above a bath in the corner of a bedroom, "who of course married her father's lover, but more of that later...."Of course. 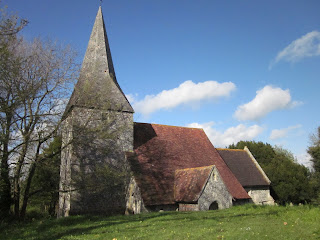 Terry also told us about Berwick Church which was painted floor to ceiling by Duncan Grant, Vanessa and Quentin Bell, during WWll, so off we went. Whether invited to or not, I'm not sure, I had visions of them just rocking up with their well-worn brushes and setting to, they certainly left no surface un-decorated of the tiny, Grade 1 listed church, crouching on the pre-christian sacred site, filling it with biblical murals depicting local people, family and friends as angels, shepherds and the baby Jesus. 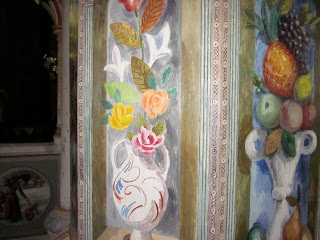 Finally we arrived at Little Owl, our home-from-home yurt in the wood, which turned out to be really rather wonderful. 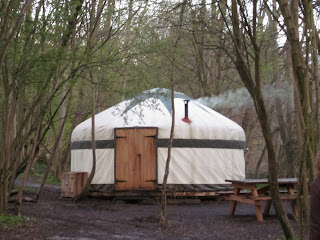 We had comfy beds and a wood -burning stove, pots and pans and a 2-ring gas cooker, the crate in the corner was stacked with logs and a container of fresh-drinking water dripped reassuringly full.  The wood burning stove though small in size belted out a big heat and we were soon cosy and warm. Our version of toasting marshmallows round the camp fire involved vodka tonics and a dish of olives.....you can take the girl out of London..... 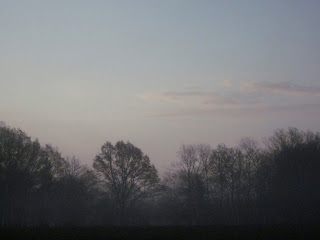 The pink light bit through the cold dawn air as I picked my way through the deciduous dampness and across the foot-sodden, rain-grass, towards the nearest toilets. Some kind of large-winged, loud-buzzing thing flew noisily out of the compost loo so I wimped past and prised open the blue door of the the porta-loo, listing dangerously in the mud. This is for me the problem with camping. I don't care about shower facilities, I can happily live without electric lights, home-entertainment-systems and mirrors but the dawn-dash for a pee is just not what you need after a hard night of vodka and scrabble.


Yurt etiquette dictates that first up sticks another log on the fire before going back to sleep. So we slumbered until one of our party had the good grace to make coffee served with slabs of delicious bread made from spelt and heritage floor, bought from the the campsite, with butter and Dot's homemade marmalade.

We managed to get a brisk walk through the blue bell wood, the Blue Bell railway sending smoke signals in the distance, before the first down-pour. Then headed to the pub.

With no radio or TV and after a night in the wood, I felt like I was a million miles away from London. Which is why, perhaps, when we slunk into the 'famous Griffin pub' for a couple of pints of excellent Bloody Mary, devoid of make-up, jeans rolled up over mudded boots and probably smelling strongly of bonfire, I sat on the comfy sofa, open-mouthed, as if wearing the cloak-of-invisibility, staring and listening to James as he back-slapped and side-kissed his clientele, sang Clash songs and moved with the hyper-activity of an over-sugared-five-year-old from one side of the bar to the other. Drinks and cabaret.

When the rain stopped we were off to take a turn around Sheffield Park Gardens and view the beauty of Capability Brown's planting and I learnt Capability is a nickname, he was really called Lancelot. 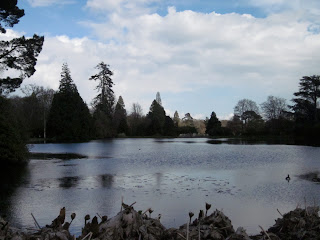 We met a man who lives within the walled-garden where he has a vineyard and sells wine and things to plant and grow, or stick in and decorate, your own garden with. Both my friend and I thought it might be nice to live with him in his walled garden but we think that vacancy has already been long filled. 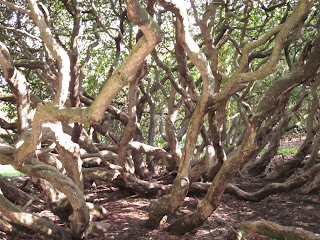 The evening turned a rather beautiful blue. Back at the yurt things were hotting-up. Part of the deal is a 'complimentery bowl of soup'....bring your own bowl. This was billed as part of a potential music-and-fun evening. I'm not much one for group activities but my companions were so I was frog-marched into the field adjacent to our wood, ringed by the blue and green tents of professional campers, and told to join in. Children dangled from rope swings slung in the trees, men played boules, and fires were alight. In the middle of a central, fenced area stood a very large pot of soup and a box of the delicious Wowo bread. There was two bald men and three young children sitting at one of the many wooden but empty tables. Undeterred, we pressed on however, although the yurt provides all the things one needs to eat with and on, the bowls were little more than saucers so helpings would be small. I lifted the lid of the giant pot and ladled the lemon-coloured liquid, potatoes, carrots, split peas, and something green, into the shallow dishes. 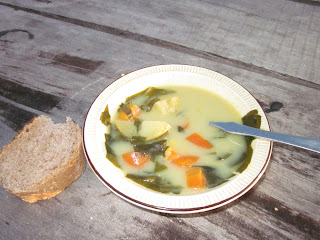 "Is it good?" I asked, climbing up onto one of the huge wooden benches.
"No" said my friend, pulling the childish face of a six-year old being given medicine. She was right, chef seemed to have omitted any kind of stock or even salt and therefore flavour was indeed missing. We went back to the yurt for bread, cheese and lashings of red wine from the man in the walled garden. 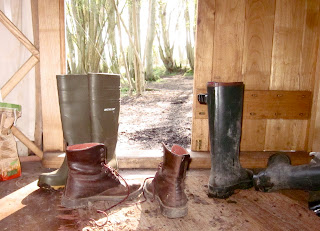 On Sunday we broke camp and planned our route home via a trip to Barcombe Mills and a row on the Ouse, messing about on the river while the sun shone. Really a rather fine end to a weekend away.